May 24, 2019
Admin
No Comments on Budapest: Christmas holidays in Hungary’s capital

The festive season kicks off early in Budapest. Its Christmas market usually opens in early November, the first in Europe to celebrate winter with colourful stalls, traditional dancing and cups of steaming forralt bor (mulled wine). It adds an attractive veneer to one of Europe’s great cultural capitals.

The five-star Corinthia Hotel Budapest in the heart of bustling Pest has the class that one expects from a grand dame hotel. With just 10 rooms, Pest-Buda is a true boutique hotel with bags of character in Buda’s romantic historic centre.

Starting at the impressive Chain Bridge, hike uphill (or ride the funicular) to the Castle District. Wander cobbled streets, admire views across the Danube and tick off landmarks such as Buda Castle: once home to Hungarian royalty. 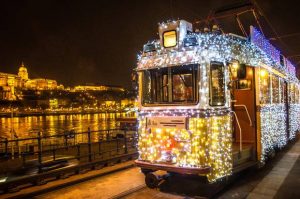 Heroes’ Square was created in 1896 to commemorate Hungary’s millennium. Its monuments and museums provide a memorable backdrop to City Park, whose lake becomes an ice rink in winter.

A leisurely soak in mineral waters is a Budapest tradition. The city has 118 geothermal springs and numerous public baths. The grand facades and steaming pools of Szechenyiare the perfect place to warm up after wintry sightseeing. 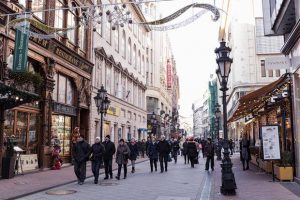 Work up an appetite at the Downtown Market, then bag a table at Stand 25, an informal bistro serving local dishes such as goulash soup and chicken stew with noodles. Expect to pay $30 for lunch (three courses) or $50 for dinner (four courses), without wine.

Many of the showiest landmarks lie along the river. See them on a 70-minute cruise from Vigado Square – unless it’s so cold that the Danube ices up.