In this extract from Lonely Planet‘s book The Vanlife Companion, find out the best stops on a campervan trip along America’s Pacific Coastal Route.

Bewitching ribbons of Hwy 1 and Hwy 101 await all along this route up the West Coast, from California into Oregon and Washington. Uncover beaches, seafood shacks and piers for catching sunsets over boundless ocean horizons — better yet, your odds of finding an overnight spot with an ocean view along this route are excellent.

San Francisco
There will be gridlock, but don’t despair. Hwy 1 runs straight through the city’s biggest, most breathable greenspace: Golden Gate Park, a conservatory of flowers, arboretum and botanical gardens.

Follow Hwy 1 north over the Golden Gate Bridge. Guarding the entry to San Francisco Bay, this iconic bridge is named after the straits it spans, not for its “International Orange” paint job. Park in the lot on the bridge’s south or north side, then traipse out on to the pedestrian walkway for a photo.

Slow-moving, wonderfully twisted Hwy 1 runs along the Marin County coast, passing nearby Point Reyes. Over the next 161km from Bodega Bay to Mendocino, revel in a remarkably uninterrupted stretch of coastal highway. More than halfway along, watch for the lighthouse road turnoff north of Point Arena town.

Further north, guarding an unbelievably windy point since 1908, Point Arena Lighthouse is the only lighthouse in California where you can actually climb to the top.

It’s an hour-long, 56km drive north along Hwy 1 from the Point Arena Lighthouse turnoff to Mendocino, crossing the Navarro, Little and Big Rivers. Stop and stretch (or stop for the night) at one of the wind-tossed state beaches or parklands along the way.

Mendocino & Fort Bragg
Looking more like Cape Cod than California, the quaint maritime town of Mendocino has white picket fences surrounding New England-style cottages with blooming gardens and redwood-built water towers. Its dramatic headlands jutting into the Pacific, this yesteryear timber town and shipping port was “discovered” by artists and bohemians in the 1950s and has served as a scenic backdrop in more than 50 movies. Once you’ve browsed the souvenir shops and art galleries selling everything from driftwood carvings to homemade fruit jams, escape north to workaday Fort Bragg, with its simple fishing harbour and craft brew pub.

About 40km north of Mendocino, Westport is the last hamlet along this rugged stretch of Hwy 1. Rejoin Hwy 101 northbound at Leggett for another 145km to Eureka, detouring along the Avenue of the Giants and, if you have more time to spare, to the Lost Coast. 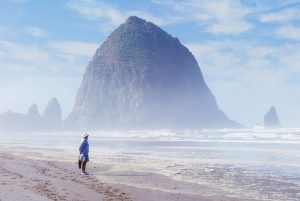 Your first stop on the Oregon coast, Brookings has some of the warmest temperatures on the coast, and is a leader in Easter lily-bulb production; in July, fields south of town are filled with bright colours and a heavy scent. In May and June you’ll also find magnificent floral displays at the hilly, 12ha Azalea Park.

Samuel Boardman State Scenic Corridor
This 19km stretch of coastal splendour features giant stands of Sitka spruce, natural rock bridges, tide pools and loads of hiking trails. Along the highway are more than a dozen roadside stops and picnic areas, most of which allow you to stay for 12 hours — so they make excellent dry camping spots, and you’ll wake to an Instagrammable ocean view.

The viewing platform at Natural Bridge Viewpoint (Mile 346, Hwy 101) offers a glorious photo op of rock arches — the remnants of collapsed sea caves — after which you can decide whether you want to commit to the hike down to China Beach.

Port Orford
Perched on a grassy headland, the hamlet of Port Orford is in one of the most scenic stretches of coastal highway, and there are stellar views even from the centre of town. If you’re feeling ambitious, take the 4.8km trail up Humbug Mountain, which takes you up, up, up past streams and through prehistoric-looking landscapes to the top, where you’ll be treated to dramatic views of Cape Sebastian and the Pacific. If it’s time to stop for the night, a parking lot atop the hill at the end of Harbor Rd charges a nominal fee for overnight camping (and restrooms at the visitor centre nearby).

Bandon
Optimistically touted as Bandon-by-the-Sea, this little town sits happily at the bay of the Coquille River, with an Old Town district that’s been gentrified into a picturesque harbourside shopping location. Along the beach, ledges of stone rise out of the surf to provide shelter for seals, sea lions and myriad forms of life in tide pools. One of the coast’s most interesting rock formations is the much-photographed Face Rock, a huge monolith with some uncanny facial features that does indeed look like a woman with her head thrown back — giving rise to a requisite Native American legend.

Oregon Dunes National Recreation Area
This stretch of coast offers something altogether different in the landscape: sand. Lots of it. Stretching 80km, the Oregon Dunes are the largest expanse of oceanfront sand dunes in the US. Sometimes topping heights of 150m, these mountains of sand undulate inland up to 5km. Hikers and birdwatchers stick to the peaceful northern half of the dunes, and the southern half is dominated by dune buggies and dirt bikes. At Mile 200.8, the Oregon Dunes Overlook is the easiest place to take a gander.

In Reedsport, the Umpqua Lighthouse State Park offers summer tours of the 1894 lighthouse.

Cape Perpetua
Whatever you do, don’t miss the spectacular scenery of the Cape Perpetua Scenic Area, 5km south of Yachats. You could easily spend a day or two exploring trails that take you through moss-laden, old-growth forests to rocky beaches, tide pools and blasting marine geysers. At the very least, drive up to the Cape Perpetua Overlook for a colossal coastal view from 245m above sea level — the highest point on the coast. While you’re up there, check out the historic West Shelter observation point built by the Civilian Conservation Corps in 1933. There’s a good campsite here, too.

Just south of Cape Perpetua, look for Cook’s Chasm, a rock formation that spouts water when the waves churn around it; the parking lot here offers endless views (and no signs forbidding overnight stays). This entire area was once a series of volcanic intrusions that resisted the pummelling of the Pacific long enough to rise as oceanside peaks and promontories. Acres of tide pools are home to starfish, sea anemones and sea lions.

Newport
Don your marine-biologist cap and head to Yaquina Head Outstanding Natural Area, a spit of land that protrudes nearly a mile into the ocean. This headland is home to some of the best touch pools on the Oregon coast. You’ll also get a good look at the tallest lighthouse in Oregon, Yaquina Head Lighthouse (not to be confused with Yaquina Bay Lighthouse, 5km south). At the cutting-edge Oregon Coast Aquarium, seals and sea otters are cute as can be, and the jellyfish room is a near psychedelic experience.

Lincoln City
The sprawling modern beach resort of Lincoln City serves as the region’s principal commercial centre. In addition to gas and groceries, the town does offer a unique enticement to stop: from mid-October to late May volunteers hide brightly coloured glass floats — which have been hand-blown by local artisans — along the beaches, making a memorable souvenir for the resourceful and diligent vacationer. 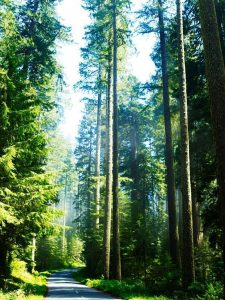 Not all coastal towns are built on seafood and sand. Tillamook has a different claim to fame: cheese. Thousands stop annually at the

for free samples and a picture-window view of the massive cheese-making factory floor.

Manzanita
One of the more laidback beach resorts on Oregon’s coast is the hamlet of Manzanita. You can relax on the white-sand beaches, or, if you’re feeling more ambitious, hike on nearby Neahkahnie Mountain, where high cliffs rise dramatically above the Pacific’s pounding waves. It’s a 6km climb to the top but the views are worth it: on a clear day, you can see 80km out
to sea.

Cannon Beach
Cannon Beach is one of the most popular towns on the Oregon coast. The wide sandy beach stretches for kilometres, and you’ll find great photo opportunities and tide-pooling possibilities at glorious Haystack Rock, the third-tallest sea stack in the world. For the area’s best coastal hiking, head to Ecola State Park.

Check your tide table and head to the beach; Gearhart is famous for its razor clamming at low tide. All you need are boots, a shovel or a clam gun, a cut-resistant glove, a licence (available in Gearhart) and a bucket for your catch. Watch your fingers — the name razor clam is well earned. Boiling up a batch is likely to result in the most memorable meal of your trip. For information on where, when and how to clam, visit the Oregon Department of Fish & Wildlife website; it’s a maze of a site, so just Google “ODFW clamming”.

Fort Stevens State Park
Thousands of vessels have been lost in the Graveyard of the Pacific, from warships to barges to freighters. A few are occasionally visible at low tide, but the easiest one to spot is the Peter Iredale, resting at Fort Stevens State Park. The ship was driven on to the shore by rough seas on October 25, 1906, and the wreckage has sat embedded in the sand ever since. Today, kids have made a jungle gym out of the rusted skeleton and families picnic and build sandcastles on the nearby sand at low tide. (No lives were lost in the wreck, so don’t let the thought of ghostly sailors dampen your fun.)

Astoria
Astoria sits at the mouth of the Columbia River, where you’ll find some of the Pacific’s most treacherous waters, thanks to river currents rushing out where ocean tide is trying to get in. The town has a long seafaring history and has seen its old harbour attract fancy hotels and restaurants in recent years. The Columbia River Maritime Museum sits right on the edge of the Columbia River, offering a look at everything from old boats to washed-up maritime mementos. A Coast Guard exhibit — featuring a rescue boat plying dramatic, fake waves — makes you really appreciate the danger of their job.

Oysterville & Nahcotta
The charm of these old communities — the only ones on the bay side of Washington’s Long Beach Peninsula — derives not just from their history but also from the absence of the beachfront towns’ carnival atmosphere. Tiny Oysterville stands largely unchanged since the oyster boom of the 1870s.